The 3D resistivity imaging introduced herein this article works like this: electrodes are laid inside the mine tunnel, encircling the mine working face. Electrode array configuration is 2-pole vertical electric sounding, current electrode B and potential electrode N are located infinity far away. Vertical electric sounding is realized by increasing the distance between current electrode B and potential electrode N. Data acquisition system is WGMD-2 by BTSK, data transfer software is the BTW2000 data communication software, and inversion software is Res3D INV. Finally, we obtain a 3D resistivity inversed model of the rocks at a certain depth beneath the mine working face, and then we slice the data vertically and transversely, acquire the resistivity information of every data point beneath the mine working face, and thereafter analyze water content of the working face floor.

2. 3D Resistivity Tomography Imaging
No matter whether it is 3-pole electric sounding, or 2-pole electric sounding, both of the data sampled are two-dimensional (2D) data, in other words, survey line can only leads to acquisition of a profile that is parallel and beneath the survey line, which is extremely limited for hydrogeology prospecting. For instance, to perform multi-electrode 2D survey on a rectangle mine working face, along the floor and roof of the mine tunnel, what we can acquire is profile of the floor of the mine tunnel, without detailed information of the floor of the mine working face itself. However, for the technicians, what’s important is the latter, water content of the mine working face floor. 3D resistivity imaging technology makes use of the multi-electrode transmitting unit and receiving unit to electrically scan the underground rock, and CT imaging according to the resistivity difference of the earth. If the transmitting unit and receiving unit are settled reasonably, it surely will show enough data point and severe potential anomaly of the underground or of the underground mine. Then we can go on to data handling and inversion calculation to educe resistivity distribution of the underground rocks. On judgment of the relationship between resistivity and water-bearing rock we can interpret the water boundary and the distribution of the waters; on judgment of the relationship between the water resistivity and water content, we can depicture a 3D model of water distribution, and therefore predict water distribution as well as water volume inside the mine working face.
3D resistivity inversion procedure is as show in Fig.1. 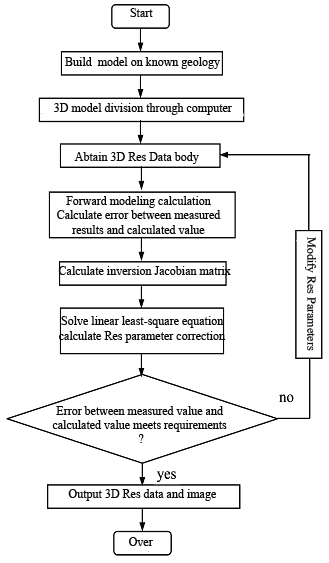 3. Data Sampling & Handling
Data handling procedures of multi-electrode 3D resistivity underground mine imaging mainly involves the following steps:
(1). Delete abnormal data point: during data acquisition process, some abnormal data may appear because certain electrode is not grounded well or is interfered by field factors. To avoid influence on the interpreted data, delete these bad data points in time.
(2). Smooth and balance the data: during the process of data sampling, there may be noise recorded. To eliminate the noise generated by the instrument itself, smooth and balance the data, but DO NOT too much to avoid lost of useful information and descending resolution.
(3). Build inversion model: 3D mode is a cubic space formed by the level surface that is parallel to the survey region face, X and Y axis, composed of many a cuboids, the adjacent four electrodes forms one face, that is to say, length and width of a cuboid equals to one unit electrode spacing. Height of the top cuboid is 0.7 times of one unit spacing, height of the lower cuboids of the models increasing 15% based on the cuboids of the upper layer. To increase inversion precision, the 3D model can be further subdivided into to another two variations, one way is to vertically and transversely cut the subdivisions to get 8 same-sized smaller ones; the other is simply to vertically cut the subdivisions to get 4 smaller one. In that the resolution of resistivity survey is weakening as depth increases, the calculation indicates that the subdivided model should not be more than two layers. Generally, one subdivision layer is enough, for the more the subdivision, the longer time the inversion process takes. 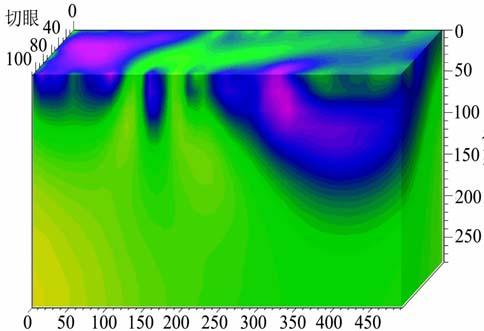 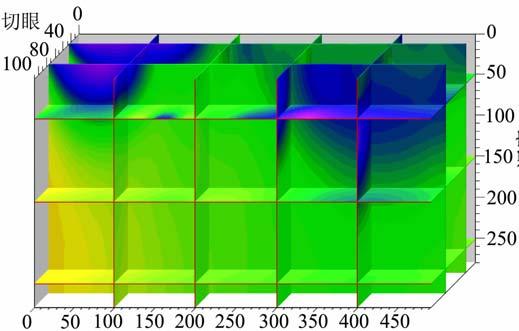 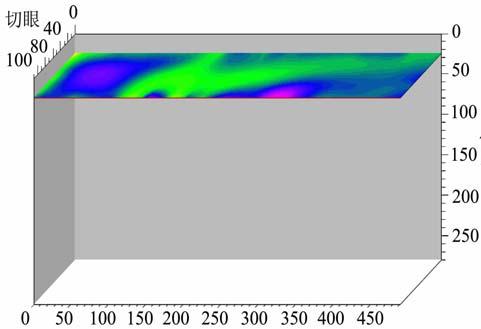 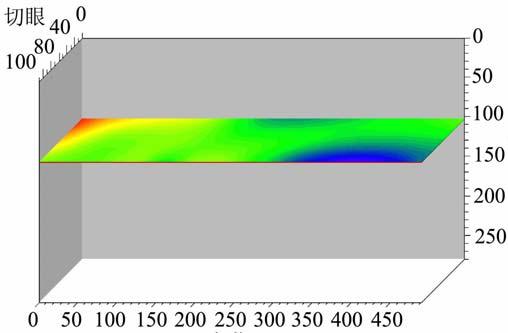 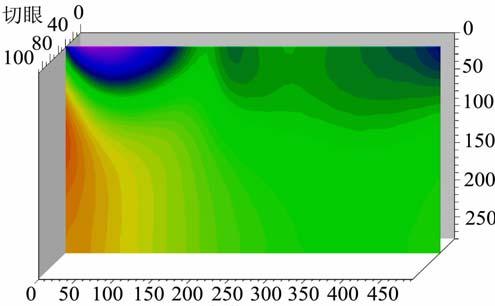 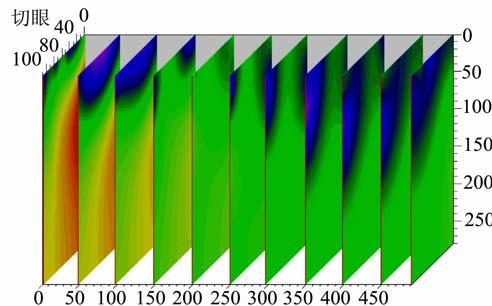 First, we preliminarily build submodels according to the measured apparent resistivity value, calculating with Finite Element Analysis (FEA) or Finite Difference Method (FDM) to perform forward modeling, and obtain a preliminary model of apparent resistivity anomaly model. The program then compares the forward modeling value and the measured value, according to which resistivity of the submodels are adjusted. Next, again perform forward modeling calculation on the adjusted model. It repeats the above process on modeling time and again, and the difference between the forward modeling calculation and measured value is decreasing. The error is measured by Root-mean-square (RMS). We generally take the inversed data model as the final where RMS error has no much change at the third or the fifth iteration.

4. Survey Example
Data process of this survey practice finally gives us a 3D resistivity data model of the 71504 mine face floor, Xiezhuang coal mine, Xinwen coal field. The mine working face model is 490m long, 110m wide, 280m high. Origin of the model is the joint of the floor and the cut. Positive length direction of the model is along the outside of the floor, positive width direction is along the upper walking of the cut, both in unit of meter (m). Depth direction is vertical to the strata but not perpendicular.

The following data interpretation is based on the 3D models, and the vertical and transverse slices. Low resistivity indicates rich water content; high resistivity indicated poor water content. In figure 2~7, it is obvious that there are two low-resistivity anomalies. One is inside the mine working face, about 150m away from the cut, yet not deep, no more than 50m, just deep into the Xujiazhuang limestone, not into the Ordovician limestone. Another low-resistivity anomaly is at the outer side of the mine working face, deep into the working mine face about 150m, near the mine roof, which influences deep into 180m (into both Xujiazhuang limestone and Ordovician limestone). The later borehole surveys on the mine working face and at both the anomalies, DO prove that water content of the Xujiazhuang limestone and the Ordovician limestone is coherent to our prediction.