Abstract:
Land subsidence and tunnel formations are now become common features in the Western Ghats, Kerala during high rainfall seasons. This phenomenon is caused by physical and chemical processes of soil. The major reason for land subsidence is subsurface erosion called “soil piping”. The incident was first reported in 2005 in Cherupuzha, Kannur since then many incidences of land- subsidence were noticed in different parts of the State and most of them often go unreported. This work aims to identify the suitable electrical resistivity imaging technique to detect places that are susceptible to soil piping process. 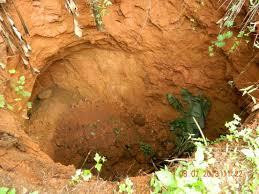 Objective
The objective of this study is to determine the suitability of geophysical techniques such as Electrical Resistivity surveys by using Digital multi-electrode resistivity imaging techniques to map the underground pipes /cavities and their extent.

Study Area
The study area comes under the two districts, located at Nelliyedukkam (fig. 3) in Kinanoor village, Vellarikund taluk in the Kasaragod district (lies between latitudes 11º40' to 12º 48' North and longitudes 74º 52' to 76º 56' East) and Kottathalachimala (fig. 4) in Thaliparamba taluk in the Kannur district (lies between latitudes 12º15' to 12º 17' North and longitudes 74º 12' to 76º 15' East), The affected locality in Nelliyadukkam has been the side slope region at 55 meters above MSL in elevation. Pipe outlet is located at 50m north of this area. In this area a huge tunnel shaped pipe was formed as a result of sudden collapsing of the surface soil due to the continued erosion taken place beneath the top cover. Surface fissures were also identified in the premises of the tunnel. In Kottathalachi mala the affected locality is situated in the highland region with elevations reaching up to 801m. The upper slope ischaracterized by high slopes (+300) where as the lower slopes are about 240. The Kottathalachi mala is characterized by radial drainage indicating its shape. Many lower order streams originate from this hill. Charnockites rocks dominates Precambrian crystalline basement of the area the overburden material above the basement is clay rich loamy soil. The side slope of the Kottathalachi mala is characterized by thick soil cover especially the area where the incident (tunnel) occurred. The average overburden thickness is about 15m.We shall present the case of Nelliyedukkam ,Kasargad District of Kerala . 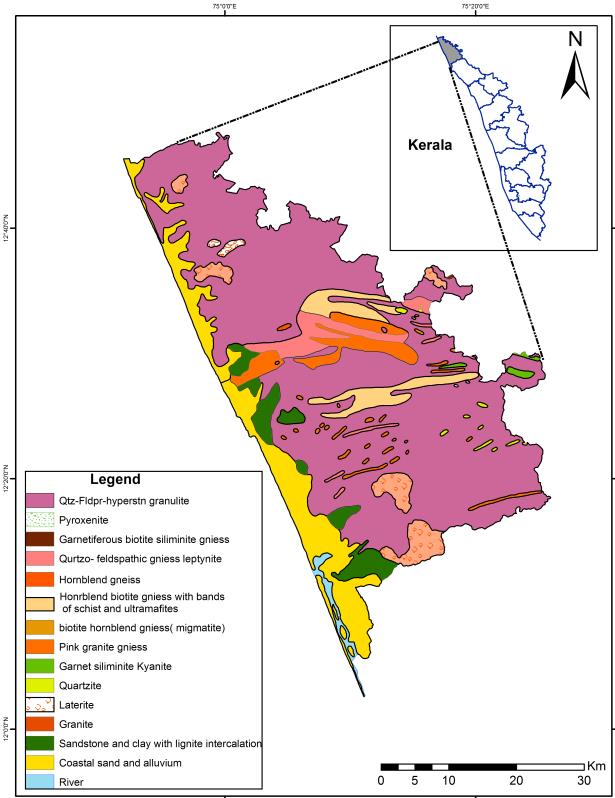 Materials and Methods
Electrical Resistivity Survey was carried out at Nelliyadukkam, Kasaragod across the alignment of a known soil pipe by using multi-function Digital DC Resistivity/IP Meter (WDJD-4), having WDZJ-4 switcher box. All survey lines are in east west direction, the suspected soil piping is in south to north direction. A total of 7 survey lines were laid, 3 on above the known soil pipe, 3 surveys were laid on east side of the piping and one on the roadside. Sixty electrodes used for survey at 1m and 2m spacing, so, total survey line went up to 60 and 120m respectively. The terrain gently slopes towards north and profiles were across the slope so that there was no elevation correction needed while the data on processing. Profile GPS co-ordinates were marked on 1, 15, 30, 45, 60 electrodes to label the electrode position & corresponding elevation. In survey line S1and S2, the instrument was placed at the centre of the target (above the cavity) to arrive greater depth of penetration. S3 and S4 laid 15m east from the tunneling. S5 is laid directly down of the survey line S1. The survey line S6 is in 20m east of S5, survey line S7 laid in road side near subsidence1.The best resultant cross-sectional Electrical Resistivity Tomography section is plotted. The survey tools included electrodes, connecting cables, multi resistivity meter, battery pack, laptop to deliver data gathered from the instrument in a graphic manner. Survey was done using 60 electrodes extended equally (30 each) to both sides with an interval of 2 meters. 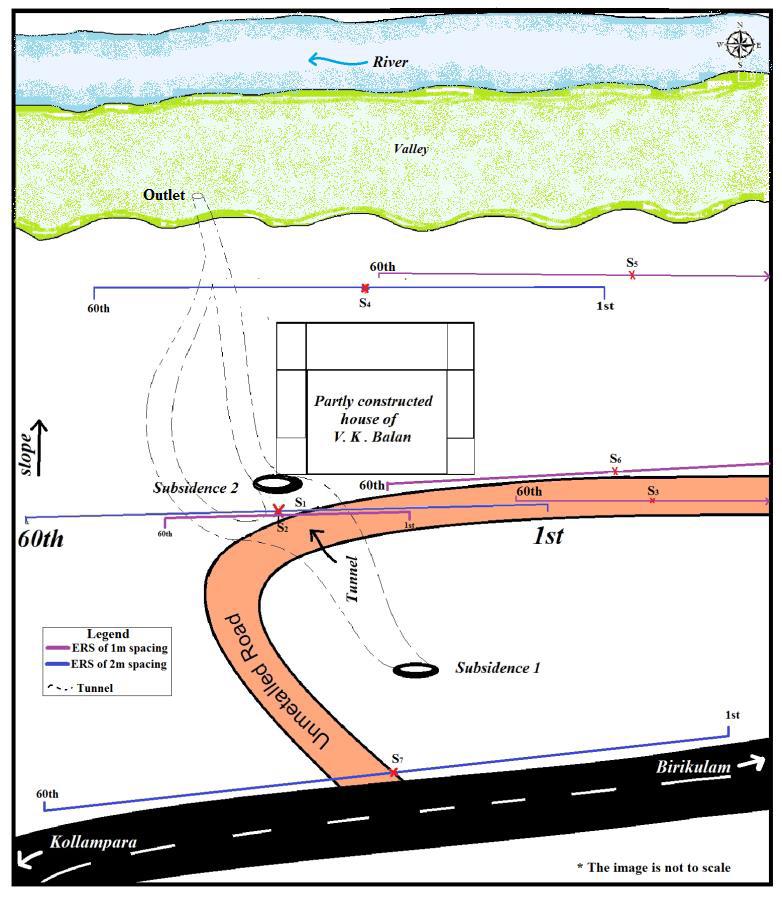 Survey line 1 (S1):
The qualitative interpretation of the resistivity section indicates that the technique could delineate the conductive zones where the soil pipes were formed, evident from the profile laid at Nelliyedukkam. These profiles are directly above the pipes and the possible orientation of pipes at these locations is known. The total depth of information obtained from 23m. The resistivity value changes from 36.4 to 1510Ωm. The presence of high resistive zone vertically below the central electrode is strengthened from the Geo-electrical sections of profile. The tunnel roof was observed at a depth of about 3.98m from the surface in all three electrode configurations. While the Schlumberger and Wenner configurations helped us in determining the tunnel roof, the high resistivity zone could be seen extending at a depth of 3.98 to 10.5m, in the schlumberger configuration. The data generated by schlumberger configuration was more accurate than Dipole-Dipole and Wenner array mode.

Survey line 2 (S2):
This profile was also laid at the same point of profile S1with an electrode interval of 1m. Depth of information obtained was 11.5m and high resistivity value obtained was 2366 Ωm. From the schlumberger and Wenner images, a sudden increase of resistivity (~500 to 2366Ωm) was indicated at a depth of 2.69 m indicating the starting point of tunnel section. The high resistivity zone continued up to a depth of 11m. The lateral extends of the tunnel was more visible in this profile.

Survey line 3(S3):
This profile (S3) was laid 15m east of the survey line S1 at an electrode interval of 1m. From a high resistive zone (>2264 Ωm) was seen in the middle portion in between station 22 and 33 at the depth of approximate 2m to 4.38m which is an indication of a tunnel like feature. This feature was also observed in Wenner configuration. It has a lateral extent of 11m and thickness of 2.38m underline by low resistant water saturated zone

Survey line 4 (S4):
The survey line 4 is laid across the soil pipe (east to west direction) and the midpoint of the profile is 12m north of the pipe. The electrode interval was 2m, the total distance of the profile was 120m and the maximum depth of penetration achieved was 23m. Two high resistive (>1551 Ωm) zone was identified at a depth of ~ 5.37mwhich indicated pipes. From this profile it was observed that the tunnel cross-section was bigger than the tunnel entrance. This figure indicated branching of the pipe. In the dipole –dipole configuration it was indicated clearly.

Survey line 5 (S5):
This survey line has E-W orientation and is parallel to Sand has a station interval of 1m. The first electrode position was at east side. From this profile the high resistive zone with a lateral extent of almost 10m and detected at a depth of 2.69m to 7.38m may not be a pipe like feature. This is because the dipole-dipole configuration indicated that the high resistive zone continued downwards and the apparent resistivity values of 1528 Ωm was less than the value generally obtained from known piping area. Therefore, the high resistive zone may be indicative of a high resistive rock bolder.

a. Schlumberger array in piping area.

Survey line 6 (S6):
Survey line S6 runs in the E - W direction with midpoint placed at 10m towards north from the survey line S3. This Profile showed moderately low resistivity at shallow depth and relatively high resistivity at a depth of 2.62m which continued further. The same feature was also observed in profile S3. The inhomogeneous layer made it difficult to attribute the anomaly to any specific geological feature. The anomaly could be indicative of small underground soil pipe or a boulder. Since, the Schlumberger configuration response for the feature was different from the normal Schlumberger response to soil-pipe as observed for survey lines S1, S2& S4, the anomaly could not be interpreted conclusively.

Survey line 7 (S7):
The survey was carried out on the road side; the contact resistance was relatively higher than the other profiles because of the hard nature of the road fillings. The resistivity of the top hard layer was found relatively higher and this probably represented rock-dominated top layer.

a. Schlumberger array in piping area

Conclusion
The resistivity image generated using schlumberger, Wenner and Dipole-Dipole configuration for station interval of 1m and 2m exhibited resistivity anomalies in correspondence with soil pipes. The profile laid on the top of the soil pipes showed high resistive zone indicating tunnels as the resistivity of cavity is much higher than resistivity of surrounding hard rocks. The surrounding regions of this high resistive zones indicated lower resistivity values attributable to saturated soil beds. None of the profiles could trace the bed rock as the depth of investigation was limited, though certain profiles reached up to a depth of 23m. The physical attributes of the soil pipes measured, generally at the inlet and outlet points, matched well with the results obtained from the electrical resistivity imaging. Therefore, electrical resistivity imaging technique is found to be a tool for locating spatial disposition and geometry of nearsurface soil pipes. Comparing various (Schlumberger, Wenner and dipole-dipole) arrays, the Schlumberger gives the depth of information and it is useful for differentiate cavities from the rock boulders; Wenner array gives information about the piping in shallower depths. If the pipe is in shallow, Wenner array useful for the study the upper layers of the piping and the Dipole-Dipole array give the clear cut picture of the cross section of pipes. It also gives the information about branching of tunnels.